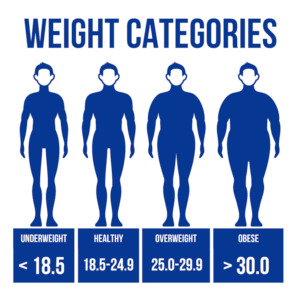 This subject may not be popular in the USA, especially in those more senior but like taxes, it must be dealt with properly or the consequences can be catastrophic. Most people are in denial believing that weight gain just is inevitable in seniorhood. NOT SO. My Grandparents and Mom were in rest homes and when I visited there were almost no residents that were obese.
The main number for weight determination that you should calculate is your BMI (Body Mass Index). Google “BMI calculation” or click on the following link – Body Mass Index Calculator and input the info about your height and weight and a number will appear. 25 or less and you are OK. Over 30 is OBESE! Get with the program! Living well is recognizing the truth and acting sensibly.

Waist circumference is another way to determine when action is needed. Women should be concerned over 35 inches and men over 40 inches. Another perhaps more meaningful measurement is the waist to height ratio. It should be 50% or less.

Where you have fat is important. Generalized subcutaneous fat is less harmful than “visceral adiposity” or a kind way to announce someone has a “BEER BELLY.” A greatly increased abdominal size is a factor in the very undesirable metabolic syndrome which is to be avoided as it forebears health problems.

Diets for weight loss abound as the most popular health info sources and some indirectly achieve a healthier state through weight loss, but for rock-solid dependability, we should trust the two most studied geographically named diets: the Mediterranean Diet and the Okinawan Diet. Located thousands of miles apart with vastly different cultures, they are among the longest-lived and healthiest people on earth. The Mediterranean diet is primarily the diet of southern Italy and people living in the south of Italy live longer than northerners do. Okinawa is a southern Japanese island and the Okinawans live longer than other Japanese. These statistics are particularly impressive when one considers that the Italians (#4) and Japanese (#1) are nations having the highest national longevity on Earth.

There is nothing wrong with adopting a “named” diet but most in need find that drastically altering their eating intake is difficult. My approach is to expand foundational knowledge about a subject and let people design what makes sense to them.

Foodstuffs are commonly classed in three general categories: fat, carbohydrates (sugars), and proteins. They are mentioned in the order of calories they contain. For weight control calories are all important not the volume. Calories are depicted by calories per gram (a nickel is 5 grams, pretty darn small): fat is 9, carbs are 4 and protein is 4. However, the expenditure of our body’s transformation of the foodstuffs into calories varies. Fat conversion costs only 3% and sugar’s loss from the conversion is negligible. Protein was not intended by nature to be used for energy. The transformation of it wastes 30%, so a gram of protein releases a meager 2.8 calories per gram. Yay PROTEIN!

Consuming more protein has other advantageous results: protein is more filling than the others ─ by far. It increases awareness and that possibly is the result of its Specific Dynamic Action (SDA). SDA is an increase in metabolism of about 25% for several hours after a high protein meal. This increase lowers the caloric intake by even more! SDA was described for at least 70 years and is known by very few. Amazing! High-fat results in stupor which you don’t want.

Searching for Diet books on the Amazon website registers thousands of hits. Many books on a subject indicate there is considerable need and the definitive book does not exist. We continue to concentrate on the principles of health-promoting behaviors, to get results we focus on healthy diets. In fact, the majority of scientific literature and much of the not so scientific focuses on either regional diets or recommended diets by celebrity dietary authorities, which is important but not as useful as understanding what makes a diet healthy.

What about the standard three meals a day which is entrenched into present thinking. In ancient times, there was often not even one meal a day depending largely on food availability. Romans ate one meal daily and considered consuming more meals gluttony. In western medieval times breakfast could not be eaten until morning mass was completed. Lunch showed up as “nuncheon”, an old Anglo-Saxon word which meant a quick snack. It was not regularly practiced until the 19th century.

The main meal of the day dinner became later and later as artificial lighting became available. If by happenstance the evening meal is not the biggest meal of the day, it is called supper. Supper is what we should have in our lives. It should be the smallest meal in calories. Supper is SUPER!

Thus, the timing of meals makes a difference. Our bodies operate according to what is termed a “Circadian Rhythm” because of the alterations of a 24 hour day with hormone-induced sleep-wakefulness cycles. If you want to be convinced of its power simply remember the last jet lag you experienced! I flew to Australia once and gave a major talk the day after arrival to a conference the next day. So jet-lagged, I could not have done a crossword puzzle. Thank God for slides.

Eating a late lunch, past two or three can cause a weight problem. One study showed that women who ate their major meal as breakfast rather than dinner lost weight.1 One of the strongest associations of meal timing and weight gain was a study examining the time between the last meal of the day and the timing of sleep.2 So, it appears that we should logically try to eat the most earlier in the day.

A study with over 50,000 adults revealed that eating fewer than three meals a day resulted in weight loss.3 However (no surprise), people who snacked gained weight.

Another factor concerning weight is how our bodies store energy. When I was a youngster, I drove a VW Beetle ─ proudly. There was no gas gage; there were two gas tanks. When the major tank emptied the smaller reserve tank kicked in with emergency mileage to find more gas. Our bodies have two energy tanks. But opposite to the VW, the small tank is first. Our tanks provide smaller amounts of easily available energy first, then the reserves kick in. The first energy tank is composed of stored sugars and the reserve is fat. Our bodies prefer sugars if they can actually prefer. When I go to the gym, my small tank furnishes the energy. Our small tanks are sugar stored as glycogen ─ about 900 grams in our muscles and liver. So, initially we don’t burn fat, we utilize sugars. We start to burn fat at about 30 minutes. Your antiaging diet rewards from exercise begin before you start to lose weight but fat loss starts after about 30 minutes. So, if in addition to antiaging you want to slim down, exercise longer than 30 minutes.

Being overweight has sufficient costs: “Compared with normal-weight individuals, obese patients incur 46% higher inpatient costs, 27% more physician visits and outpatient costs, and 80% higher spending on prescription drugs. the medical care costs of obesity in the United States are staggering. In 2008 dollars, these costs totaled about $147 billion.” This is from a group of scientists from the American College of Cardiology and American Heart Association.

In the future, we will continue to reach for the core fundamentals of weight management, so you the reader can become ever more informed about how to control an essential of health, your weight.